This card was inspired by a friend's card creation.

I think it's safe to say that black cats can't be trusted - sneaky devils.  Shadow, my sister's cat, is an exception; he is a total cuddle monster with a very loud purr. Unless he was whispering an incantation in my ear, I think he was asking for some more cat treats or another praying mantis to play with. 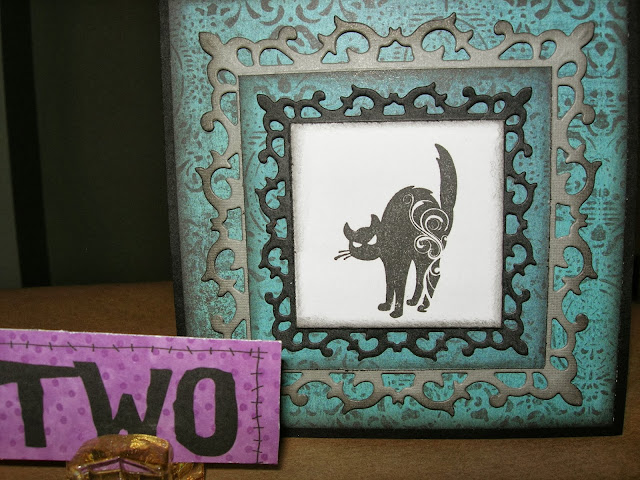 Praying mantis you ask, well read on if you're curious.

While my sister was on vacation in Africa  I stayed at her house to watch Shadow for a few days.  In the middle of the night I heard cat claws on flooring.  What the heck is he up to?  Turns out there was a praying mantis in the house and he was playing with it in the way cats do.  Poor little bugger was short a wing and may have sustained some limb injury but it was hard to tell.  I was able to get the critter onto some paper towel and out to the front stoop.  The next morning Mr. Mantis was gone so I figured he limped away by himself or his pals helped. After telling my family about this incident they told me a neighbourhood cat probably finished him off!